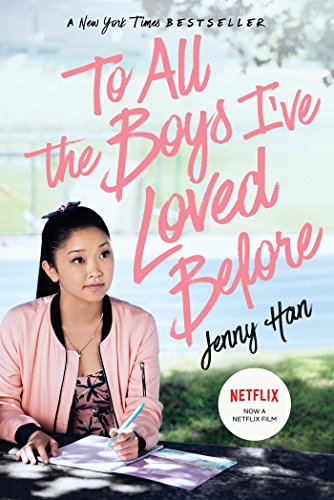 I had to read To All The Boys I Loved Before twice, in order to give it a fair review.  The first time I read it, I had just finished watching the movie, which I mentioned in a previous post that I loved it.  I never read a book after watching the movie and I would not recommend it.  You already know how the characters look and act, so it is jarring when the book describes them another way.  Also, the movie has worked out any kinks in the story / characters.  A movie has the opportunity to take a good story and make it great.

I knew that the To All The Boys I Loved Before novel had potential.  For those that do not know the plot to the book and movie, the love letters Lara Jean wrote to five boys were sent out.  She begins a fake relationship with Peter in order to cover up her love for her sister’s boyfriend.  I remember reading a sample of the book a couple years ago before I was swept up in reading another series, then I pretty much forgot about it until the movie came out.  It has all the pieces of the type of YA book I usually enjoy: a quirky heroine, a cute boy and problems that can be worked out by the final page.

My major issue with the novel when I read it the first time was I did not find Lara Jean to be as likable as she is in the movie.  Lara Jean in the book hurts people’s feelings on purpose, is a little spineless and goes chasing after a new boy before her “relationship” with Peter is over.  She really annoyed me at times.  She still annoyed me a bit the second time I read the novel and I still questioned some of her actions and decisions.  I did find her to funnier and more entertaining the second time around.

The second major issue I had was the way the book abruptly ended.  I find that is one of the most annoying things an author can do, when they end a novel in the middle of a scene or sentence.  I know the person wants the reader to buy the next book in the series, but how about just writing a good follow-up that people will want to read?  This bothered me both times I read it.

Putting the lovable movie out of my head the second time I read it allowed me to appreciate the novel more.  There are some great moments, such as Halloween, that were not included in the movie.  It can be a fun, lighthearted read.  My only warning is that if you have not read the book or seen the movie, definitely read the book first.