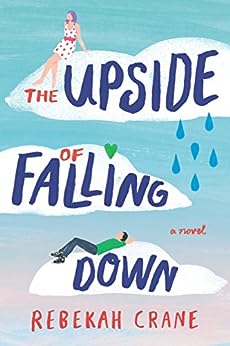 In the beginning, I was falling in love with The Upside of Falling Down.  It had so much working for it: a beautiful setting (Ireland), an unusual premise (the aftermath of a plane crash) and it was wonderfully written.  Then the boy entered the picture.  I read a lot of novels with a romantic element and frankly I am sick of girls and women falling for and trusting some random dude they just met because he is hot and for no other logical reason.  Why has no one addressed the dangers of this?  Am I only the one watching the crime shows on Investigation Discovery and Oxygen.

So here’s the premise of the book: Clementine is the lone survivor of plane crash and has amnesia.  She has no memories of who she is or how she got to Ireland.  She freaks out when her dad arrives at the hospital and runs away with this random guy that she just met.  It all goes downhill from there.

There is this saying in the book about what Jell-O is made of that just repeats too many freaking times.  It is gross and made me gag on my lunch when it was repeated between the characters like 50 times in a row.  It’s like okay, you think you came up with a clever saying, that doesn’t mean the readers want to see it repeated so many times it becomes incredibly annoying.

I got to 65% and I really couldn’t take this book anymore.  I only finished it so it would count towards my Goodreads’ challenge goal for the year.  Otherwise, I wouldn’t have finished it and finishing it was painful.  I don’t know if it was a coincidence that I got a headache while trying to finish this.

I don’t think it would have bothered me so much that this book sucked if it didn’t have so much potential.  I just wish so many authors would stop romanticizing strangers and making people think it is okay to blindly trust someone you just met.