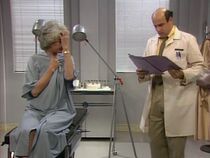 If you have ever been very sick, particularly if your illness was hard to diagnose, “Sick and Tired (Parts 1 and 2),” are The Golden Girls episodes for you.  Season 5 kicks off with a pair of episodes centered around Dorothy’s (Bea Arthur) mysterious illness.  She has had flu like symptoms for months and is no longer able to work.  She has been to several doctors, but no one can figure out what is wrong with her.  Some doctors even tell her that nothing is wrong with her and her issues must be mental because they cannot find what is physically wrong with her.

I’ve had more than one experience with doctors like this.  I don’t know what they teach people in medical school but for some reason doctors believe women are either exaggerating their symptoms or using a doctor’s appointment as a cry for help or attention.  A lot of times, I would come home from these appointments with no answers and a load of anger and frustration.  In my 20’s, I had stomach issues to the point where it hurt to stand up straight.  I went to my doctor to see if she could at least point me to a specialist, even if she couldn’t figure out what was going on.  She asked if was happy because I seemed sad.  I wasn’t sad, I was in a lot of physical pain.  She also asked if I had a boyfriend, as if a man would magically take all my stomach pain away.

So, you understand why these episodes are two of my favorites.  My favorite part is when Dorothy confronts one of the doctors that told her nothing was wrong with her and she was just getting old.  These episodes also have a very funny subplot involving Blanche’s (Rue McClanahan) attempt to become an author.  It’s especially funny when she is sleep deprived.

I would recommend these episodes to everyone.  Even if you have never been sick, maybe they will help you empathize with people who are.  When you’re sick, kindness and understanding mean so much.